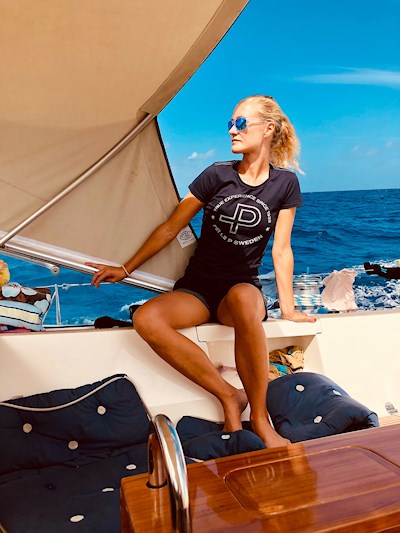 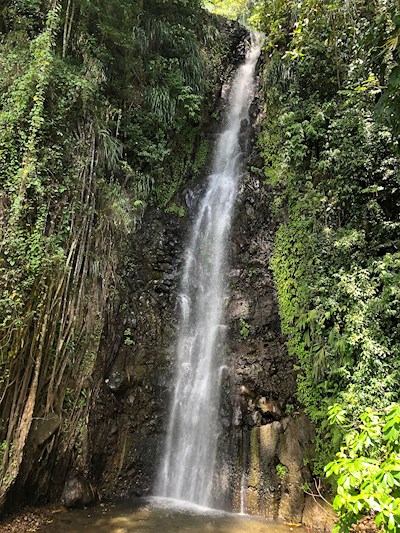 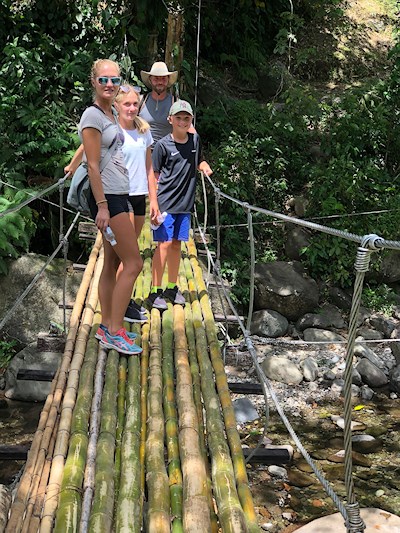 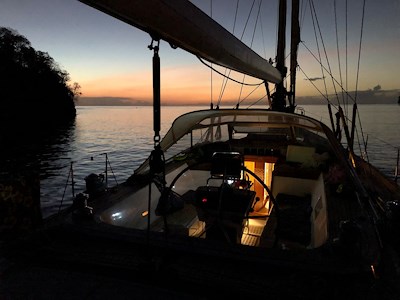 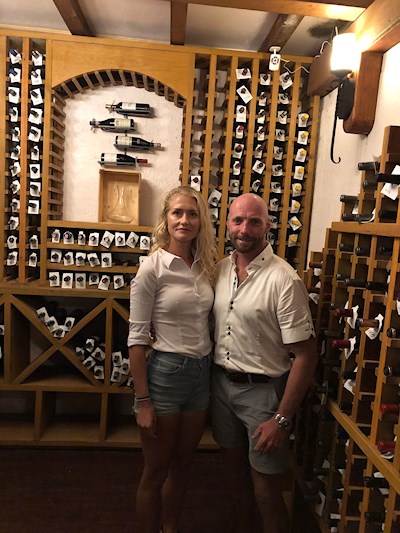 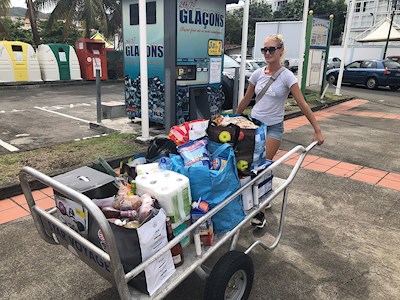 The last weeks we bring from Martinique to Grenada.

We visited some really cool places and lagoons as St.Lucia, St.Vincent, Mystique, again Tobago Ceys, The grenadines and finally Grenada were we are located now. Here we are going to drop of a German guy (Karim) who have joined us for some weeks. The agreement with him was that he work 4 hours a day on the boat with polishing and cleaning. Then we stand for food, washing clothes and all the other expences. It has worked out really good, it even feels like he is a part of the familly. He wanted to go to Trinidad. But we let him of here in Grenada due to the unsure situation and all the piracy which exists further south from here.

We bunkered Trinity up for at least 2 weeks out on anchor (see picture). In one small lagoon on St.Lucia we found a hotel up in the hill. There they had wine testing, and of course we took the chance to do something just me and Charlotte now when we have Karim onboard. He took them to a resturant and we could have our wine testing. It felt so unusual to just be the 2 of us...., it was sooooo long time ago. And the boat are not big if you live on it constantly.

On the island St.Vincent we had some jungle days. Karim wanted to see this very green island so we did the tour with him. It was wonderful for us also because it was some weeks since we did something like that. We have to be better at it, you feel great after a day climbing, jumping, balancing and so on in the rain forest.

Then we sailed to Mystique. The island is super famous because all famous people have their "summer houses" there. You can run into Madonna, Bryan Adams, presidents and so on. We hiked there one day, but its hard to actually see anything. All the houses had big signs "Private Area" where ever we came. And big walls always protecting from seeing in. The island felt a bit musterious actually.....

All sailings have been great the last weeks, winds are stabil and around 20-25 knots. That means Trinity are moving quite fast between the islands. We normally have an average speed on 7,5-8 knots. Here on Grenada we are doing some repairing. Our electrical power suply has stopped working as it should. On Monday it will come electrician so we can measure up where the problem are. We are so dependent of our power supply. If this doesnt run, we cant produce water either. Here I also changed the impeller of both power suply and on the main engine. Also our gennacker sail we sent away for repairing. It broke on the atlantic crossing and we havent fixed it before now. The harbour here is great. Its a pool area wich belongs to the marina so the kids are hanging there in the days when we fix with the boat.

After this we will slowly start to go north again. In beginning of July Axel and Nils are joining us again for 3,5 weeks. And we pick them up at Martinique. We will stay in this area during the hurricane season wich starts in beginning June and least to Beginning November. We have to be aware of the storms or hurricanes that will roll in so we can move the boat at least 4-5 days before it hits our place. The temperature has raised strongly from week to week. Now its 27,5 degrees in the water.

Trinity III and the crew have taken the decision to participate in the World ARC 2020. That means that we will do the lap around the world in approx 1,4 years. It starts in 11th of January. All stages are like a competition between the 40 boats that are allowed to participate. We are so looking forward to see how we can manage in this race.

​We are back again after some really long time without real connection.

Tobago Ceys is a place we never seen before in the whole Carribean. The water here is cristal clear, and the people here are very welcoming and nice. The first day we snorkeled and saw BIG turtels, stingrays and a LOT of amazing fishes. For the moment we are in Union Island to bunker a bit. Tomorrow we head further on south to find more crazy snorkeling places.

We all are so happy onboard to have Axel and Nils back in the crew again. They stay during the easter and fly back to Sweden the 26th of April.

We have decided to stay in this areas during the next 5 months, until the hurricane season is over. After that we will join the "World ARC". We start the race from Carribean and will pass Panama canal in February 2020. Then we head out in the pacific ocean and take sight on Galapagos.

The last weeks we had done some small repairs on the boat, and now the next months we focus to bunker the boat on all the things we need during the 5-6 months over pacific ocean. Over there we will not find any spareparts or special food at so ever. 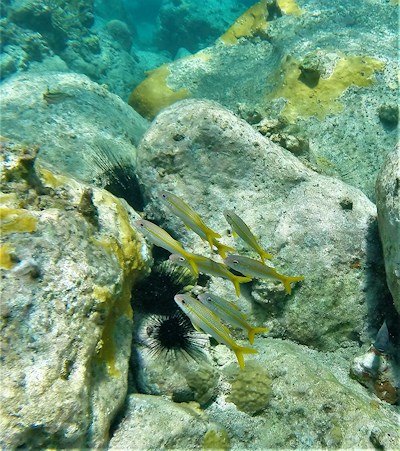 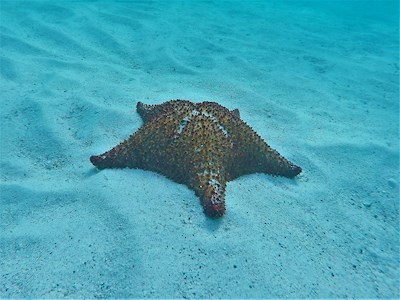 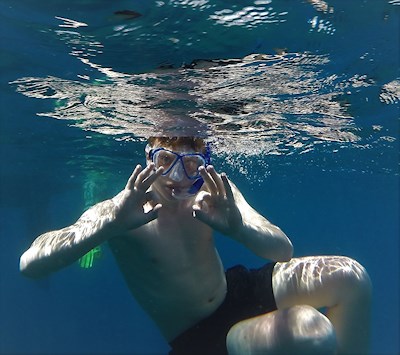 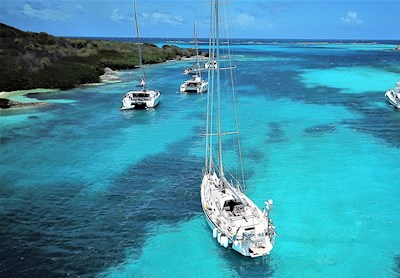 Hoj-Hoj, after many days of no connection.

We have now been to English Harbour on Antigua. There we did some nice hiking and met some other Swedes and Norwegian who also sail long distanses. It was windy conditions all days and our boat was drifting with anchor to the middle of the channel were all the BIG boats who enter the harbour comes in. We took the dinghe back to Trinity and reanchored. Antigua was a very cool place with a lot of cruising tourists. A LOT of old English people.

After Antigua we had a suuuuper wonderful sailing to Barbuda. We was looking for some connection again, but this island was totallt dead. All the pictures below are from the beach that we anchored on and from the sailing to St.Barth.. On Barbuda all the houses were destroyed after the hurricane 2 years ago. Nothing is working on the island. But we found at least a nice beach that we anchored really close to shore. If the wind was turning during the night we should litterally be ON the beach.

We had a great day at the beach. Theodora built a heart in sand with all the familly members letters and Konstantin litterally killed a palm and built a small house of palm leaves.

Charlotte took a run and I just explored and hanged around.

The day after we lifted the anchor and took sight on St.Barth. The sailing took around 8 hours to reach here. AGAIN fair winds and a super sailing. Guess when our luck is going to turn.....

On the way here we got a Mahi-Mahi. The fish gave us dinner for 2 days. They are SOOOO strong when you try to get them up on deck.

St.Barth is like Monaco, but in the Caribeans. Its SUPER fashionable and SUPER expensive. We have now 2 days of regatta here with boats that its actually insane. They need crew of around 15-20 people to sail them. But they are super nice to look at!!!! As you can see blow, they are huge and sail like rockets.....

Also the biggest private owned sailing yaght in the world anchored couple of hundered meters from us. Its owned by a russian bilionare. Toys for boys....:)

After this we set sight on St.Marteen, also an island thats like Monaco/St. Tropez.